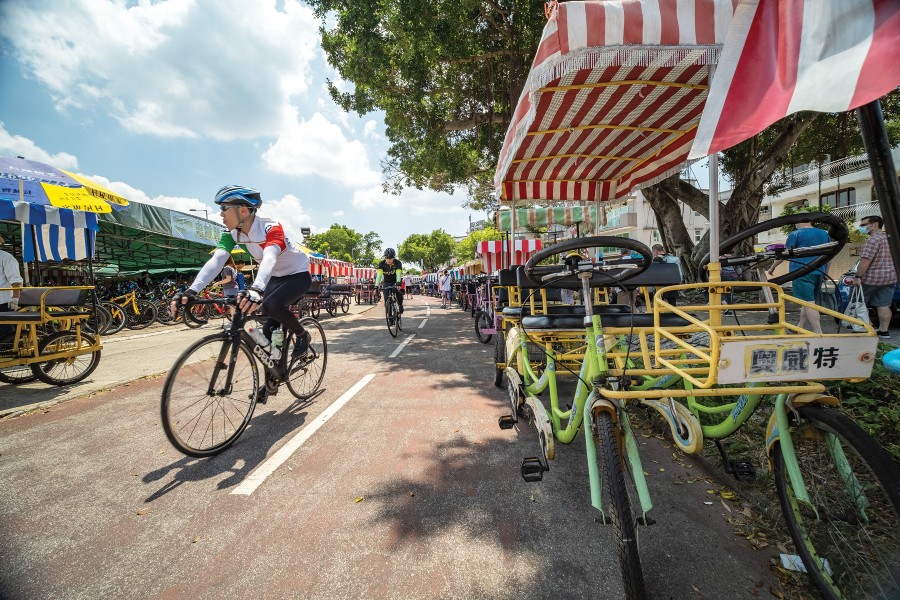 Hong Kong’s cycling boom is here to stay. As the pandemic shut down travel plans, people have flocked to cycling tracks and mountain bike trails across the city.

But while cycling in Hong Kong is largely restricted to designated bike paths, there’s plenty of options for those looking to test their skills on two wheels.

After some construction delays, a new mountain bike park will open in Mui Wo this year, complementing an already impressive selection of moderate and challenging off-road tracks. It’s very easy to rent bikes in Mui Wo, plus you will experience fantastic coastlines views and scenic beaches – just what you’ll need after cutting a swathe through the mountain terrain.

How to get there: Take the ferry from Central Pier no.6 to Mui Wo and Lantau Island. The fast ferry will get you there in 30 minutes and the regular ferry takes around 50 minutes.

One of the biggest cycling developments in 2020 was the opening of the New Territories Cycle Network that links Tai Po to Tuen Mun. The 50-plus kilometre ride zigzags through the scenic suburbs of Hong Lok Yuen, Sheung Shui, Fanling and Yuen Long. For day trippers, there are water stations, food kiosks and toilets for cyclists to rest and explore nearby attractions.

How to get there: For the ambitious day tripper, kick things off in Tai Mei Tuk, otherwise make your start in Sheung Shui.

If a 50km ride through Yuen Long sounds daunting, the bike paths that link Tai Mei Tuk to Tai Po, Science Park and Shatin offer a leisurely alternative. As a popular cycling spot, Tai Mei Tuk boasts several bike rental stores. Along Ting Kok Road and near the Tai Mei Tuk public car park, you will find plenty of shops offering cheap rental for a full day of cycling. Be warned though, weekend crowds can be brutal.

How to get there: MTR to Tai Po Station and either jump in a green taxi, mini bus to Tai Mei Tuk.

Hong Kong’s reputation as a mountain biking hub is on the rise and there are now 15 designated mountain bike trails around the city. If a challenge is what you’re after, the Ho Pui Mountain Bike Trail in Yuen Long is rated as a black diamond route, meaning it’s very difficult and requires users to be comfortable with epic jumps and steep cliffs.

How to get there: Ho Poi trail is located near Tai Mo Shan Country Park entrance and parking is available.

Hong Kong Velodrome in Tseung Kwan O is the first-ever local indoor cycling facility that meets the standards of the International Cycling Union and is perfect for the whole family. If you don’t have a bicycle, then stop by the bike rental company that caters to both adults and children. There is also a sport climbing wall, chess tables and a central lawn to run on if you still have energy left after a full day cycling.

How to get there: The Hong Kong Velodrome Park is located at 105-107 Po Hong Road, Tseung Kwan O. Take the MTR to Hang Hau Station and exit at B2.

Cheung Chau is perhaps one of the best-known outlying islands of Hong Kong, and for good reason. Not only is it packed with delicious delicacies and traditional temples to explore, but it’s also super bicycle-friendly. The island has many bicycle rental stores and cycling routes, most of them accumulating near the Pak Tai Temple. Pick up a bicycle and explore the whole island – the seaside, the beaches, the town and even up the mountains. Go on, sweat it out.

How to get there: The only way to reach the Cheung Chau Island from Hong Kong is by a boat or a ferry from Central Pier no. 5.

If safety is of absolute importance to you then head to the east of the island to check out the Quarry Bay Park Cycling Path. The large park is nestled right in the city – just a few steps from the MTR – and has a long winding path under the shade of the trees. The path is an enclosed loop and strictly for cycling, you never have to worry about veering off track and getting lost.

The longest – and arguably one of the most popular cycling routes is Tolo Harbour. It’s not difficult to see why, with breathtaking views and pleasant lakeside villages. The 20 kilometre-long trail runs from Tai Wai, weaves through Sha Tin and ends at Tai Mei Tuk, offering views of the Plover Cove Reservoir and the Pat Sin Leng mountains on the way. There are plenty of bicycle rental shops near the MTR Tai Wai Station, make it easy for yourself and pick one where you can return the bike on the other end of your journey. This gives you the option to make a one-way trip.

How to get there: Your best bet is to start at Tai Wai. Simply get the MTR East Rail line to Tai Wai Station. There you will find multiple shops that offer bike rentals from $80 to $100 for the whole day.