10 places to get cinnamon rolls in Hong Kong 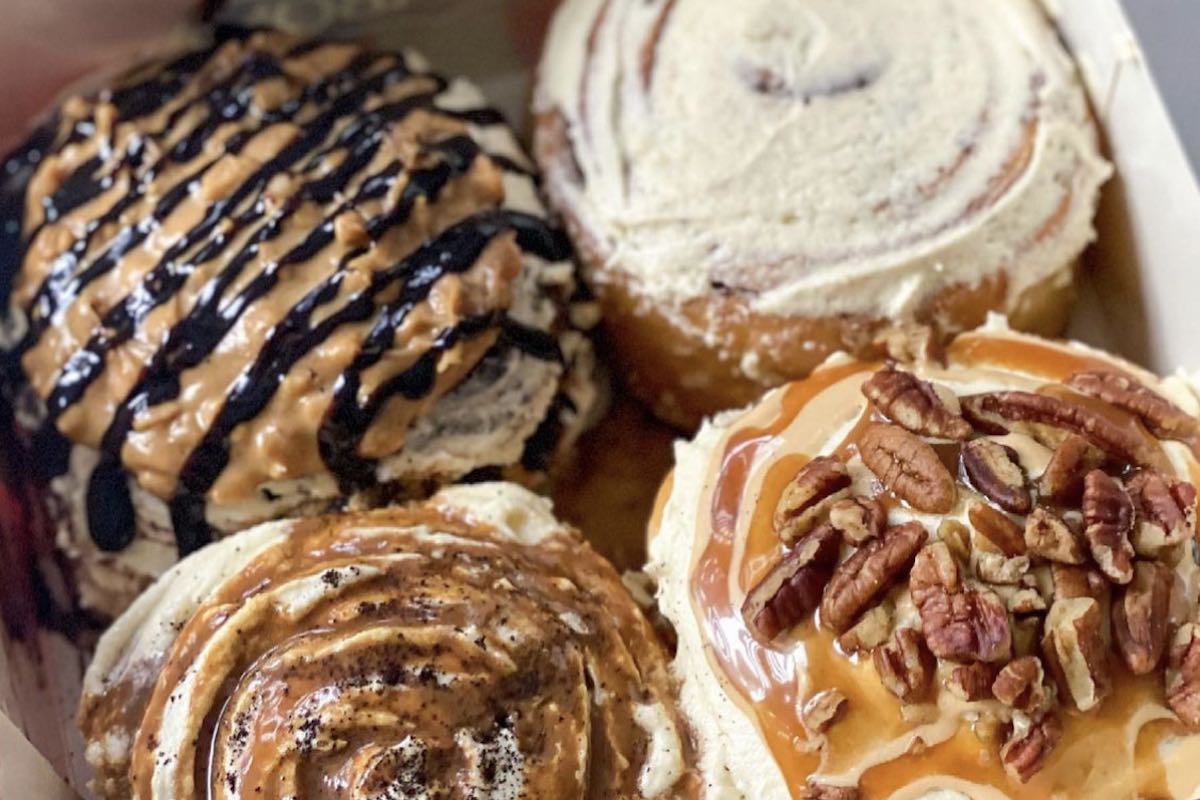 Whether it’s breakfast in bed or paired with a coffee on the way to work, a sugary yet subtly spiced cinnamon roll is a sure way to start your morning off in good spirits. From their origins in Sweden to becoming a classic American dessert, Hong Kong bakeries are following the cinnamon roll craze. If you want a cream cheese frosted, fruity or artisanal sourdough, browse the best buns in the city.

Read more: 8 places to get the best croissants in Hong Kong

A recent addition to Kennedy Town draws crowds with its glass-front bakery. In the shop front, its freshest baked goods are on show with signs telling you what’s baking next. Its take on a cinnamon roll uses a flakey pastry and is served without frosting for a more classic and spiced flavour. Other popular items are its signature unicorn puff and custard tart.

Bringing American-style cinnamon rolls to Hong Kong is iconic Cinnabon in its blue packaging and huge rolls. The most decadent of them all, these cinnamon rolls come topped with lashings of cream cheese frosting. Other flavours include its chocobon and caramel pecanbon. It also puts a spin on the classic with its cinnabon chips and cinnamon roll cold brew coffee.

An artisan bakery nestled in the alleys of Happy Valley bakes a range of fresh pastries everyday. One of its most sought after is its cinnamon roll. Have it as is or with an additional level of flavour with a salted caramel sauce. Keep up to date with the daily bakes on its Instagram account.

The signature bake at Miam Bakery is its cinnamon bun. A bread roll with layers of caramelised sugar and cinnamon is the perfect accompaniment to fresh coffee for a sugar rush breakfast. Even better, it’s available via ubereats for those mornings when you don’t want to get out of bed.

Buy a five-star pastry and enjoy the most gourmet of all the offerings from the Four Seasons Hotel. In the signature circular roll with caramelised sugar peeping through, this rose-shaped pastry is as classic as possible. Other beloved pastries include its croissant, scones and egg tarts.

This sourdough-specialised bakery offers a different sort of roll from the others. Its sourdough cinnamon bun is topped with a cardamon cream cheese icing and chunks of pistachio for a subtle earthy flavour. The spiced frosting makes this a not-too-sweet addition to the city.

Read more: Nuts about peanut butter? 9 spots to get your fill

Having grown up in Switzerland, you can trust the offering by Grégoire Michaud, founder of Bakehouse. With a base of sourdough croissant layers, this roll uses Ceylon cinnamon, pecans and brown sugar for the perfect pastry. Make sure to also pick up its signature sourdough egg tart for a remake of local street food favourite.

A small neighbourhood bakery brings big flavour with its cinnamon roll by importing most of its ingredients straight from France. This pastry has a homemade and authentic look with its irregular shapes and sizes. Don’t be fooled as under its sugary glaze lies layers of flakey pastry and cinnamon sugar.

Enjoy a creative assortment of flavours with the Fikabox from the Instagram bakery, Fikatime. Its range of classic flavours include the original, lemon frosted, caramel apple and tiramisu. Other options have incorporated grapefruit honey, Oreo and cookie dough.

An Instagram bakery is ready to cater with vegans with its gourmet cinnamon rolls. Check its Instagram page for its updated menu and where to pick up your order. Plant-based ingredients that are used include a dairy-free whipped cream, maple syrup, vanilla bean glaze coloured with beetroot and Oreos.